The Lolland Buddhist retreat center is a relaxed place with a rich history, where Diamond Way Buddhists can meditate away from the distractions of everyday life.

The center is housed in a large farmhouse, with a stupa of enlightenment in the courtyard, on the peaceful island of Lolland in southern Denmark. The center is run by idealistic volunteers and funded by donations, and is available to Diamond Way Buddhists year round for meditation retreats, as well as lectures and courses by visiting teachers. 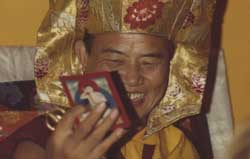 The center was given the name “The garden where the teachings grow” (Tibetan Karma Chö Phel Ling) by His Holiness the 16th Karmapa in 1977. During his stay, Karmapa dreamt that Milarepa, the great Yogi of Tibet, walked through the garden. The following day Karmapa gave an empowerment into Milarepa and performed the black crown ceremony. He predicted that “1,000 Buddhas will appear from here.”

Throughout the center’s history, all the highest lamas of the Karma Kagyu lineage have visited and taught here. His Holiness the 17th Karmapa Trinlay Thaye Dorje gave empowerments and teachings here in 2000, 2004 and 2009, and many others such as Shamar Rinpoche, Jamgon Kongtrul Rinpoche, Lopon Tsechu Rinpoche and Sherab Gyaltsen Rinpoche have shared their wisdom and blessing with thousands here. Tenga Rinpoche held annual courses at Lolland until he handed over the responsibility to Lama Ole Nydahl in 1984. Today, about 2,000 people participate in the summer meditation course with Lama Ole every year. 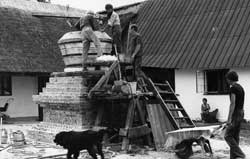 On the 31st of July 1982 the enlightenment stupa was inaugurated at the Lolland retreat center, and a new chapter of Buddhism in the West was written.

Tenga Rinpoche, one of Lama Ole and Hannah Nydahl’s teachers at the time, built the stupa with the help of team of energetic volunteers. Tenga Rinpoche filled it with relics, such as Buddha statues, and hair and clothing from Guru Rinpoche, all of the sixteen Karmapas, and other Karma Kagyu lineage holders. During his stay Tenga Rinpoche also created a large clay statue of the 16th Karmapa, which now sits in the centre of the altar in the gompa. 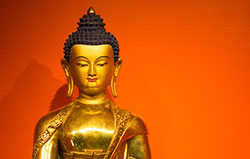 Buddha taught people who had strong confidence in the potential of their own and others’ minds the methods of the Diamond Way (skt. Vajrayana). He manifested as forms of energy and light to directly transmit his enlightened view as experience. On this level of Buddhism, the aim is the complete development of mind, the spontaneous effortlessness of total awareness known as ‘Mahamudra’, or the Great Seal. The Diamond Way offers the modern world effective methods that lead to a direct experience of mind. One learns to experience the world from a rich and self-liberating viewpoint. Diamond Way meditations develop a deep inner richness and lead to a non-artificial and unwavering mind where every enlightened activity can unfold.

Buddhism defines meditation as “effortlessly remaining in what is.” This state can be achieved by calming and holding the mind, by realizing compassion and wisdom, or by working with the energy of the body and bringing Buddha forms of light and energy to  mind. The fastest method and the primary practice of Diamond Way Buddhism is known as ‘Guru Yoga’: constantly identifying oneself with one’s own Buddha nature through meditation on the teacher, and holding the view in everyday life.

When one no longer experiences separation between the seer, what is seen, and the act of seeing—during both meditation and daily life—the goal of ‘Mahamudra’, or the Great Seal, is reached.

We practice the 16th Karmapa meditation together every evening at Lolland retreat center.

This meditation was given to Lama Ole Nydahl by H.H. the 16th Karmapa, and is an ideal opportunity to get a taste of Diamond Way Buddhism. One meditates directly on the teacher, the 16th Karmapa, not as a flesh and blood person but rather as a form of energy and light; a reflection of our own inner potential. By identifying with him, over time we take on his enlightened qualities of fearlessness, active compassion and boundless joy.

H.H. 17th Karmapa, Trinlay Thaye Dorje is the spiritual authority over Diamond Way, and head of the Karma Kagyu lineage. He was born in 1983, and escaped from Chinese controlled Tibet to freedom in India in 1994. Since then H.H. Karmapa has often visited Diamond Way centres to teach and to give Buddhist empowerments, and has been to Lolland numerous times. More at karmapa.org.

H.H. the 16th Karmapa Rangjung Rigpe Dorje, the previous incarnation of the Karmapa, is widely recognised as the King of Yogis of Tibet. He started Diamond Way in the West through his Danish students Ole and Hannah Nydahl who met him in 1969 in Nepal. The 16th Karmapa visited and inaugurated the Lolland retreat center in 1977.

Shamar Rinpoche, the second highest lama in the Karma Kagyu lineage, as well as several other Buddhist masters, also teach at Diamond Way Buddhist events at Lolland and around the world. More at shamarpa.org.

Lama Ole Nydahl, as the founder of over 600 meditation centres worldwide, travels constantly to meet his students and to teach. He leads the summer meditation course at Lolland every year in July. More at lama-ole-nydahl.org.

The teachings and meditations we practice today were taught by the historical Buddha Shakyamuni to his closest students, and later passed on through the Indian Mahasiddhas Tilopa and Naropa to the famous Tibetans Marpa, his student Milarepa, and his student Gampopa. Since then the Karmapas, from Gampopa’s student the 1st Karmapa Dusum Khyenpa in the 12th century, to the 17th Karmapa Trinlay Thaye Dorje who is alive today, have maintained the power and wisdom of the teachings for the benefit of all.